Among the various soybean pests, Heterodera glycines Ichinohe, known by most as soybean cyst nematode (SCN), continues to be a persistent cause of yield loss for soybean producers1.  SCN has been found in every county in Illinois, as well as much of the eastern United States, Puerto Rico, and parts of Hawaii and Canada2 (Figure 1). 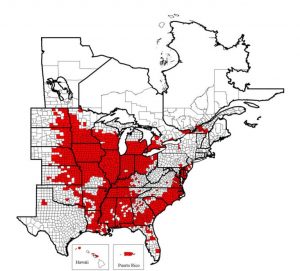 Map of the known distribution of the soybean cyst nematode, Heterodera glycines, in the United States and Canada from 1954 to 2017. Known infested counties are indicated in red. Map © C. C. Marett and G. L. Tylka, Iowa State University, 2017.

It is widely understood that the recommended control measures for this pest include rotation to non-host crops, often corn in this part of the country, and use of resistant varieties.  However, what is not generally understood is the importance of rotating the source of the resistance genes introgressed into those resistant varieties.  If a given field is planted year after year with soybeans that derive their SCN resistance from the same source (i.e. PI 88788), even if it is in a rotation with a non-host crop, a “race shift” in the SCN population may occur.  The term “race shift” is derived from the terminology used to describe and differentiate SCN populations.  Diagnostic tests were developed in the 1970s3, and updated in the late 1980s4, which classified SCN populations into “races” based on their ability to reproduce on a specified set of resistant soybean cultivars, called “indicator lines”.  This classification system was updated again in the early 2000s5 with the use of HG Types, instead of races, for SCN resistance classification.  The updated system also included an updated list of indicator lines (Table 1).  HG Type is still determined by a given SCN population’s ability to reproduce on the indicator lines at a threshold of 10% compared to the standard susceptible check variety.  For example, an SCN population with the HG Type of 1.2.4 would be able to reproduce on PI 548402 (Peking), PI 88788, and PI 437654 with at least 10% efficiency compared to the susceptible check.

By exposing the SCN population in a given field to the same resistance or control mechanism, one imposes a selective pressure on that population.  What must be understood is that in any population, genetic diversity exists.  In a given SCN population, there is likely genetic diversity associated with the nematode’s ability to feed/reproduce on a given SCN resistant cultivar.  Even if the genetic advantage is marginal and only present in a small proportion of the population, over several generations, the gene or genes responsible for the nematode’s ability to overcome the soybean’s resistance mechanism become enriched in the population.  For example, if a population of SCN is made up of individuals from HG Types 1, 2, and 4, in equal proportion, but only individuals from HG Type 2 can reproduce well on PI 88788 soybeans, several seasons of using soybeans with PI 88788-derived resistance, even in a corn/soy rotation, would likely result in an increase in the proportion of the population that would be characterized as HG Type 2 (Figure 2). 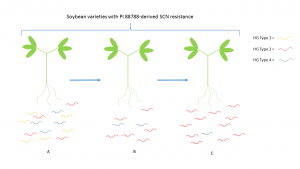 In addition to rotating sources of SCN resistance, other management practices for this pest may include the use of certain cover crop species grown during the fall and winter months.  While data on the efficacy of certain cover crop species for suppressing SCN populations in the field is often inconsistent, there have been some studies exploring this subject.  One such study was conducted by Nathan Johanning and Marc Lamczyk at the University of Illinois Ewing Demonstration Center in 2014-2017.  This research investigated the effect of three grass cover crops on yield and SCN egg counts (performed by the Illinois Plant Clinic) taken at harvest using full-season soybean under a no-till system.  Treatments included cereal rye (70 lbs/A), triticale (70 lbs/A), annual ryegrass (15 lbs/A), and no cover crop.  Each treatment was replicated four times in a given year using strip plots measuring approximately 10’ x 270’.  The experimental plot was rotated each year so that plots could remain in their corn, soy, wheat rotation. Results show no significant effect of cover crop on yield in the first three years of the experiment, but a significant yield decrease was seen in annual ryegrass plots in 2017.  This result is also seen when yield data from all years are combined, as well as when data from 2014-2016 are combined, indicating this effect is persistent although not statistically apparent in every growing season alone (Table 2).  The negative yield effect associated with this cover crop in 2017 was likely due to increased vole activity (possibly because of mild winter) and subsequent stand losses (observational, no data available), as this grass appears to be a preferred habitat for this rodent.  This may also explain the significant yield reduction following annual ryegrass seen in the 2014-2016 combined analysis.  Although the stand losses were not as noticeable in those years, localized stand loss in the center of plots would not be as apparent but would likely still affect plot yield.

As mentioned above, SCN egg counts were also performed on soil samples taken at soybean harvest.  These data were highly variable, making it difficult to draw any conclusions in which we have high confidence pertaining to the effect of these cover crops on SCN populations.  A significant effect was only observed in 2014, wherein plots that had contained any of the three grass cover crops the previous fall showed significantly lower SCN egg counts at soybean harvest (Table 3).

It is worth noticing that this is also the only year where the ‘No Cover’ treatment showed substantial SCN egg counts, although that did not translate into a significant decrease in yield (Table 2).  In years where SCN pressure was relatively low, such as 2015 and 2016, egg counts were more or less unaffected by the grass cover crops.  Egg counts in 2017 were in the “low to moderate” range, according to the University of Illinois Report on Plant Disease titled “The Soybean Cyst Nematode Problem” (RPD No. 501).  And in this year, cereal rye plots showed a relatively low egg count compared to the other treatments, but this was not statistically significant due to the large variation in egg counts between replicates.  This variation also contributed to the lack of statistically different means across all years of the study.  Despite this, comparison of the four year average egg counts show triticale, annual ryegrass, and cereal rye plots to have had 46.1%, 26.3%, and 13.1% SCN eggs/100 cc soil, respectively, compared to the no cover (Figure 3).  The results of this study suggest that cereal rye would be a preferred cover crop to control SCN before soybean, with repeatedly low egg count averages and no negative yield effect. 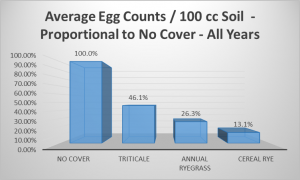 There is no standardized threshold for SCN egg counts after which damage is likely to occur, but 2,000 eggs per 100 cc of soil is considered “moderate to high”, according to RPD No. 501, and counts above this have been called “cause for concern” by the Illinois Soybean Association (ISA).  This statement came in a press release announcing an ISA checkoff-funded study, led by Dr. Jason Bond of Southern Illinois University, that will further explore the relationship between grass cover crops, including wheat, and SCN.  Larger studies like these are necessary for better understanding how cover crops may interact with SCN under a wide range of soil types, weather conditions, etc., particularly when dealing with a highly variable indicator of potential damage, such as SCN egg counts.  Hopefully, from continued research into alternative control methods of SCN, such as cover crops, we will be able to add more tools for combating this pest to our proverbial toolbox, thereby reducing the farmers’ dependence on non-host rotation and host plant resistance.

If you would like to test your field(s) for SCN egg counts or HG Type, samples can be submitted to the University of Illinois Plant Clinic.  Samples should be taken from a field following harvest, the season before soybeans are to be planted in that field to allow time for the development of a control strategy.  More information on sampling methods and service fees can be found on the Plant Clinic’s website.

University of Illinois personnel will also be conducting an SCN survey this summer in concert with several other pest surveys.  If you are a landowner and are interested in allowing traps to be placed on your land and/or soil samples to be taken from your fields, please contact Kelly Estes at kcook8@illinois.edu.

The original posting is located here on The Bulletin.